Born and raised eQonce (King William’s Town), I spent my childhood years in the Ciskei, a section of South Africa that was under homeland rule. In many ways the main themes that drive my work today: memory, place, collective thought, symbology were greatly inspired by this. My longest running body of work unpacks the collective response of my community towards the government of the Ciskei.

Throughout the area formerly known as Ciskei, the landscape is scattered with remnants of structures, monuments and even cemeteries, which are left derelict after the borders ceased. These spaces were an early starting point in my interest in this series, as physical reminders of the legacy of apartheid as well as constant points of reference by those who remember their past significance. 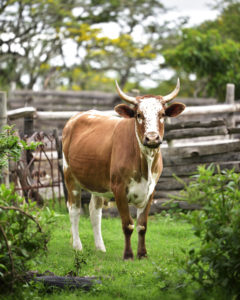 Sometimes these pockets of the past are a grimy eyesore to communities, used by the homeless and drug addicts. Many recall stories of how these properties ended in a fury of petrol bombs and angry crowds of protesters. As someone who has been practicing graffiti art since 1999, many hours have been spent around the derelict walls of these structures, from initially polishing my craft to installing more intentional works much later on in my career.

As a graphic designer I am naturally intrigued by visual communication, I am even more excited by the merger of this with governance. What significant visual cues and values are used to create government coats of arms? Which of these take greater priority in their visual layout? These were some of the grounding questions I sought to unpack when I initially started a body of work that critiques the national coat of arms of the Ciskei government and its facilitators.

This, coupled with my growing interest in derelict structures led to experiments in ‘place-making’ when responding to the elements in the coat of arms. This process forms part of showing the failings of a past dictatorship’s promises, displayed in its eroding official properties. The detail in how I engage with these structures becomes an additional arsenal in my tools of communication and story telling.

The Ciskeian Coat of Arms consists of the following illustrated elements:
A Blue Crane, Four Ivory Armbands, Two Leopards, An Ox-Head, The Milkwood Tree and the motto “Siyakunqandwa Ziinkwenkwezi” 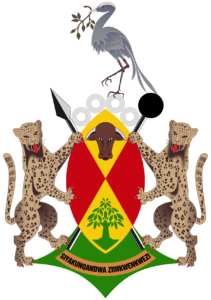 In this series I respond directly to each of these symbols and have located the artworks in different locations that further engage the context of the artwork. The site-specific works all appear within the area once known as the Ciskei: Ntaba ka Ndoda, eMqwashwini (Peddie), Dimbaza Industrial Zone, Zwelitsha and Bhisho Stadium.

A South African Government Gazette, published 8 September 1972 lists these elements, their relevance, as well as their aesthetic placement within the greater design to great detail. Although loaded with many factual details about the history of the people of the region, the text also serves as a sobering example of how a coat of arms (which at face value responds sensitively to representation) acted as the official stamp of a dictatorship. The title of this body of work “Isizathu Esihle Singafihla Ububi” is a nod to this, an excerpt from the poem by JJR Jolobe titled ‘Ukwenziwa Komkhonzi’. This area, where governance meets visual art/communication is the reservoir of my inspiration and where I weave the bulk of the story, seeking to restore the dignity that some of these traditional symbols still owe to their originators.

This series of murals and works across a specific area has, in its nature led to photography as means of a final medium for presentation.

Ideally my wish would be that viewers would be able to experience all the senses involved when inside these spaces engaging with the artwork. In the same way one remembers a place and time once they detect the familiar smell of a particular dish or the melody of a favourite song.

Buntu Fihla is a visual artist and founder of Dlala Indima.